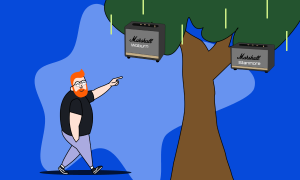 Size comparison: Marshall Stanmore II at the top and Woburn II at the bottom.

In summary, owing to its extra 50 W woofer (a HUGE difference), Marshall Woburn II is not only louder than the Stanmore II, but it's also more satisfying to listen to - even at lower volume levels.

Now let's get to their bolts and nuts. In summary, owing to its extra 50 W woofer (a HUGE difference), Woburn II is not only louder than the Stanmore II, but it's also more satisfying to listen to - even at lower volume levels.

Although the Woburn is louder, Stanmore II is still significantly loud. For most people, at full volume, it's even drunk party level loud.

The tweeters are smaller amplifiers are able to vibrate quicker. They're responsible for producing high frequency sounds.

Whereas the woofers are the larger amplifiers, placed at the bottom of speakers, under the tweeters. They produce lower frequency sounds.

In addition to these exact amplifiers in the Marshall Stanmore II, Woburn II steps up its game and brings in an additional 50 W woofer in the table.

Now this is what I call a huge difference.

Having an equally powerful, extra woofer is a game changer. It's like equipping the same airplane with two more engines.

Now you might think to yourself that the difference in the decibel department doesn't seem to reflect that much of a difference: 110 vs 101 dB.

But there's one part you got wrong there: Decibel scale is logarithmic, not linear.

So, in reality, assuming everything else is equal, a 110 dB speaker will almost be twice as loud as a 101 dB speaker.

But loudness isn't the only advantage you get with an extra woofer. There's another advantage, and to most people (including me and probably you), it's even a more important one.

The extra woofer in Marshall Woburn II will help it product more satisfying sounds compared to Stanmore II. You can see also this being reflected to the technical specs in the lower frequency department.

Notice the horizontal beige stripe at the bottom of this Marshall Woburn II. Base (not II) models of both Woburn and Stanmore speakers lack this stripe - which you can use to distinguish them from one another.

The lower number is the lowest sound the speaker cone can emit. May be lower than you can actually hear. Probably not the most important stat to look for in speaker specs but it’s there.

Lower frequency sounds does NOT simply represent bass strength. It's deeper than that.

The take away here is that the Marshall Woburn II will be able to produce more quality sounds than the Marshall Stanmore II.

Before you pull the trigger and buy one of these speakers, I'd recommend you to consider durability as well.

If you won't be gentle to these speakers, then certainly don't get them. Their coverage and overall structure aren't made to stand against strikes and scratches. To me it feels like it's almost possible to peel the surface with my bare fingertips.

These 60's rock and roll hipster speakers are made to be an elegant and functional piece of your authentically furnished home, boutique store, or a music studio.

I'd recommend you to base your decision primarily on the living space you'll place these speakers.

Get the Marshall Woburn II for a living room and the Stanmore II for a smaller room.