Both Logic Pro X (see image) and FL Studio offer strong features that enable the bedroom producer to create professional music from home (assuming they have the appropriate skill set). Logic Pro X is Mac only, and FL Studio runs on all platforms.

If you are looking for a Digital Audio Workstation software that lets you record audio and MIDI, comes with software instruments and sonic resources that you can use to create your own music, then Logic Pro X and FL Studio are two options you need to have a look at. Before you read further, though, you should know that these are aimed at budding professional producers in mind who want to start a track from scratch and mix, master and render it as a finished product. For beginners or hobby musicians who just want to make a beat or two or podcasters who just want to record audio, we suggest you check out an option like Garageband (Mac only) or Audacity (cross-platform) instead.

In summary, both Logic Pro X and FL Studio offer strong features that enable the bedroom producer to create professional music from home (assuming they have the appropriate skill set). Logic Pro X is Mac only, and FL Studio runs on all platforms. The former offers a more versatile set-up that can cater to any genre of music; FL Studio tends to lean more towards electronic genres. Logic’s depth results in a steeper learning curve in contrast to FL Studio’s easy UI.

Here’s a comparison to help you make your decision.

The rise of the bedroom producer has been directly proportional to the mighty DAW. These computer programs basically replaced most of the functionality million-dollar studios used to be gatekeepers for. And empowered anybody with music production skills to make professional music at home. Over the years, each DAW has grown with its unique set of quirks and characteristics that can have an influence on how you make your music. So choosing the right one can be crucial to the process.

Originally known as one of the most complex DAW's not suitable for the faint of heart.

Apple's acquisition has seen this software transition into a consumer-friendly product over the years, though. It is often looked upon as the software budding producers 'graduate' from Garageband.

Note: The software remains Mac only.

The sequencer on Logic Pro X is akin to most DAW's out there. Create beats, basslines, record vocals, play melodies. Anybody with prior experience with a DAW will feel quite at home here with the UI.

Additionally, Logic Pro X's 'Cell System' allows you to take smaller ideas or loops (read below) and put them into small boxes. So you could throw in a drum loop, bassline, and melody in one section, a different set of the same in the next section, and start working on a song. This non-linear method of composing allows you to play around with your ideas without committing to the timeline upfront.

Work on your arrangement in real-time, add additional parts into the empty cells and create as you go. Once you're happy with the permutations, you vibe with, move them to the linear sequencer.

Earlier versions of Logic were one of the first to include a library of pre-recorded loops. You could just drag and drop these onto your sequencer to get an idea going. For those who are not experts at an instrument but still want to compose, this system has established itself as a very useful tool for composition and songwriting.

For those who came late, a plugin is a software tool that 'plugs in' to your system.

It could be a synthesizer instrument, a sampler, or an FX rack.

In the analog era, these used to be actual hardware that would literally be plugged into your studio with cables. In the digital age, it's more of a drag-and-drop affair.

Need a synth? An effect? A couple of mouse clicks, and you're good to go.

Logic Pro X comes with a plethora of instruments and effects. From Samplers for your 'bread and butter' sounds to vintage synths and drum machines to a suite of FX. All of which are amply equipped to work for any genre.

One of the pros of using an Apple product is the seamless integration of your iOS gadgets to control the software. Use your iPhone or iPad to slide faders, rotate knobs, trigger cells, and play software instruments.

You might also want to check Logic Pro's User Guide. 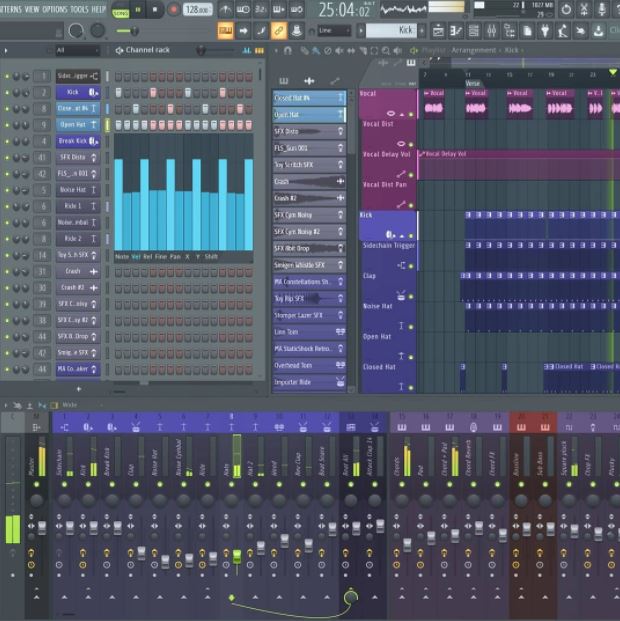 FL Studio’s (see image) primary strengths have always been its vector-based UI, ease of use, and a surprisingly versatile range of effects.

FL Studio has been the secret tip for electronic dance music producers for a while now. Like many of its contemporaries, it has grown from its beginnings as a quirky digital toy called 'Fruity Loops' into a full-blown DAW that holds its ground.

FL Studio’s primary strengths have always been its vector-based UI, ease of use, and a surprisingly versatile range of effects. Originally a PC-only app, recent cross-platform compatibility and lifetime upgrades have ensured a loyal following.

Let’s have a look at what it brings to the table.

While the array and depth of instruments don't really compare to Logic's legacy of Software instruments, there is a generous offer here that suffices, least to say.

That being said, the overall sonic array is testimony to its original roots as a tool for EDM producers. It is VST compatible, though, so integrating those into your system is always an option.

The FX is not an exception to this rule either. Most presets are quite apparent in their hints at electronic music. That being said, those with basic music production skills like EQ and compression should not have any problems tweaking the same to suit their tastes and needs.

The sequencer in FL Studio looks like a pretty standard linear timeline. The core engine of FL Studio's workflow, though is its Mixer.

In addition to standard functions (mixing and mastering), it also gives you a host of features like advanced automation, side-chain compression, latency compensation which users swear by. It is this particular set of sonic capabilities and the manner in which they are operated that makes it so unique.

Additionally, there's the Piano Roll which is not just your standard MIDI affair but can also be used to assign automation to instruments and sequences.

The FL Studio comes with a very versatile playlist and browser that gives you a detailed and flexible overview of your sequence elements. This helps a  lot while experimenting with finer adjustments during the composition and arrangement. And organizing the entire process.

Logic comes at one flat price of $200 that includes everything.

This comes in 4 versions:

Note: The only version of FL Studio that costs lesser than the Logic Pro X is the Fruity edition which, unfortunately, does not record audio.

Here’s how Logic Pro X and FL Studio add up against each other: