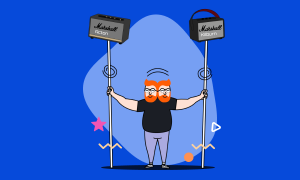 Since Kilburn II is portable whereas Acton II (see image: Acton II Bluetooth) is not, this comparison doesn't really make much sense. My point in this post is to prove that the Kilburn II is NOT simply the portable version of the Acton II.

I was wondering about the differences between Marshall's Acton II vs Kilburn II speakers as they're roughly the same size.

So I made an intense research about this and also contacted the Marshall Customer Service (chat history available at the bottom of this post), but I didn't really like their support due to some outright incorrect information.

In the end, I've put together all my findings here in this post.

Marshall Acton II Bluetooth and Kilburn II aren't cheap by any means. This is why I'd recommend you to read this short post entirely - but if you're looking for a short answer, here it is: So how does this happen?

The biggest confusion I see people get caught with the Acton and Kilburn is around their decibel ratings.

Which, in most audiophile's opinion including me, is mostly a misleading metric for most of us.

My first beef with decibel metric is that it isn't all that accurate in measuring loudness since it's affected by the room acoustics and materials.

Kilburn II is crammed with the very same amount and sizes (but not strength - more on this in a minute) of speakers (2 tweeters & 1 woofer) in the Acton II Bluetooth:

Notice how the two tweeters are backed up to one another with the Kilburn II. This makes the Kilburn II propagate omnidirectional sound (from both ends).

In the end, this becomes an advantage for Kilburn II in terms of scoring higher with the decibel metric.

Now that is true on paper. Kilburn II is slightly louder than Acton II - when measured at 1 meter of distance, but that's because the Kilburn II is omnidirectional. Another Customer Rep I talked to verified this as well:

Whereas in reality, that's far from the case:

As long as these speakers are placed at the corner or to the wall, Acton II will be significantly louder and powerful than the Kilburn II.

Which brings me to my second beef with the decibel metric: Even when measured correctly, it fails to deliver the REAL aspect to loudness and power.

At its full volume, you wouldn't even be able to distinguish your favorite song of all time. Because it won't sound any different than an annoying shriek.

But at the end of the day, it does score higher in the decibel department.

You see, decibel is a metric of "loudness". That's it.

It leaves out everything else completely. Especially what we care the most about when it comes to power: Being able to play at high volumes without any loss of sound quality.

When put together side by side and played at the same high volume, the Acton II sounds clearer, more pleasant and without any distortion whatsoever.

I'm not saying you'd better ditch the decibel rating completely, because you shouldn't. It does have its place. But in this subject case, there's no comparison between the Acton and the Kilburn.

Acton is able to produce louder sound AND at higher quality.

Before you buy go ahead and pull the trigger on one of these speakers, I'd recommend you to consider durability as well.

If you won't be gentle to these speakers, don't get them. Their coverage and overall structure aren't made to stand against strikes and scratches. It seems like it's almost possible to peel the surface with my bare fingertips.

These 60's rock and roll hipster speakers are made to be an elegant and functional piece of your authentically furnished home, boutique store or a music studio, etc.

I like how the guitar strap of Kilburn II goes with its (or the entire line-up of Marshall speakers) retro vibe. It's pleasant to carry around, but definitely nowhere near being small.

Its size is almost the same with the Acton. So it isn't easy to carry around.

Kilburn is portable whereas the Acton is not, so this comparison doesn't make sense to say the least.

If you don't need portability, then get the Acton since it produces noticeably higher quality sounds.

Excerpt of the chat with the Customer Rep

Hi there, what are the differences between Kilburn II and Acton II Bluetooth?

Hello, thanks for contacting us.

The biggest difference is that the Kilburn II is portable, the Acton II Bluetooth is not.

What about sound quality?

Let me take a look, one moment please.

This means the Kilburn II is capable of playing much louder.

Yes, both of these speakers would be sufficient.

I'm just trying to figure out how these technical differences would play out in practice.

They are fantastic speakers, I don't think you can go wrong with either of them.

The Kilburn II offers multi-directional sound which the Acton II doesn't, the Acton II only has forward facing speakers.

Being louder, The Kilburn II will provide a more saturated experienced however the Acton II is capable of this as well.

In terms of sound quality, they are comparable speakers.

What do you mean by more saturated?

But from what you're saying, it sounds like there's no reason to get an Acton II Bluetooth over Kilburn II.

And they're the same price.

The Acton II Bluetooth offers different features: if you get a 2nd II Bluetooth speaker you can use them both in pairs.

They can be used with the Marshall Bluetooth app.

I suggest reading through both the product pages and taking a look at their manuals to get an idea of how each product can be used and the features that they offer.

Here is a link to the manual for the Kilburn II, https://support.marshallheadphones.com/hc/en-us/articles/360000356678-User-Manual-Kilburn-II

Here is a link for the Acton II Bluetooth manual, https://support.marshallheadphones.com/hc/en-us/articles/360000459618-User-Manual-Acton-II-Bluetooth

So assuming one speaker only, Acton II Bluetooth has no advantage over Kilburn II?

Not necessarily, depends on what you value in your speaker.

Capabilities for future use with other speakers.

Use with an app.

Other than use with other speakers, can you tell me something that the Acton II Bluetooth can offer but the Kilburn II can't?

You are most welcome. Don't hesitate to write again with any further questions or comments.